Klik her
for at åbne det. 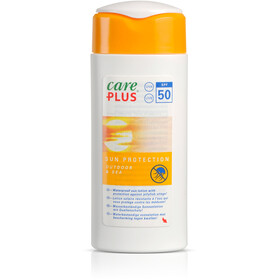 Many jellyfish species can sting when they come into contact with humans. Jellyfish stings can cause pain, swelling, irritation and redness of the skin. The extent of the discomfort depends on the jellyfish species and the amount of poison injected. Care Plus Outdoor & Sea SPF 50 not only protects against the harmful effects of the sun, but also against most jellyfish stings, corals and sea anemones.

Outdoor & Sea SPF 50 forms a protective layer on the skin so that the jellyfish does not recognise the swimmer as a possible prey when touched and does not inject any poison into the skin. Outdoor & Sea SPF 50 also provides a high level of UV protection and is waterproof. The effective substance panthenol nourishes and soothes the skin. The cream has been clinically tested by dermatologists and is also suitable for children's skin.

The patented technology of Care Plus Outdoor & Sea SPF 50 is based on the clownfish known from the Disney film "Finding Nemo". Scientists observed with astonishment that the clownfish could easily swim across coral reefs and past sea anemones without being injured. Sea anemones - also from the jellyfish family - fire small poisonous harpoons in their hunt for fish.